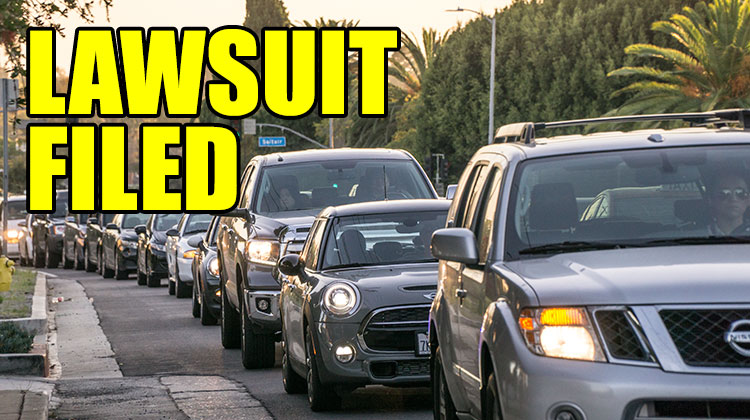 Los Angeles, Oct. 14, 2015 – Brentwood residents today announced they have sued to block the Archer School for Girls’ massive expansion project, alleging it will overwhelm neighborhoods with illegally large structures, jeopardize the health of its own students with toxic fumes and swamp already-paralyzed Westside streets, including Sunset Boulevard, with “tens of thousands” of additional vehicle trips.

The LA Superior Court lawsuit alleges the campus expansion project # involving nearly a quarter million square feet of construction and tens of thousands of construction-related truck trips – will “significantly burden not only the nearby residential community, but also the entire west side of Los Angeles.”

“The Archer project is a monster – it’s far too impactful and big,” said David Wright, co-chair of the Sunset Coalition, a nonprofit advocacy group and a party to the lawsuit.

Wright spoke at a news conference across the street from the school. A digital signboard, set up at the event, flashed messages to motorists stranded in the afternoon traffic jam. The lawsuit is posted on the website sunsetcoalition.org. Video shot from a drone of Sunset traffic at rush hour are also available on the website.

“Traffic on Sunset is already brutal at rush hour every weekday,” said Wright. “But if the Archer project goes forward as planned Sunset will become an even bigger traffic nightmare.”

“It’s not just Sunset that’s affected,” said Wright. “There’s a domino effect. Traffic jams on Sunset inevitably spill over onto other east-west streets on the Westside, including San Vicente and Wilshire Boulevards. Once quiet north-south side-streets are also impacted as motorists desperately try find a way out of the Sunset nightmare.”

“Our lawsuit seeks to save the Westside from Archer,” Wright said.

“Sadly, Archer’s MO has been no different than that of any big developer,” added Wright, noting that the school spent at least $850,000 on lobbyists at City Hall. “Its big-gun lobbyists pulled strings at City Hall and persuaded lawmakers to back a project that will run roughshod over Westside neighborhoods and abuse thousands of motorists. Archer’s attitude is apparently: the public-be-damned, full-speed ahead.”

Eric Edmunds, president of the Brentwood Hills Homeowners Assn., said: “It is incredible that Archer and its supporters have argued this project will reduce the traffic mess on Sunset Boulevard.”

“We believe Archer’s project violates both the California Environmental Quality Act (CEQA) and the city’s own ordinances that restrict the size of buildings in a residential zone,” said attorney Douglas Carstens, whose firm (Chatten-Brown & Carstens LLP) is handling the lawsuit for the Sunset Coalition. “Archer’s project must be significantly down-sized to be legal.”

The Archer environmental impact report (EIR) “understated and improperly evaluated the impacts of the proposed project,” the lawsuit alleges. “The proposed $80-$100 million Archer School expansion project will be one of the largest and most disruptive construction projects on Sunset Boulevard [from the coast to West Hollywood] in over 100 years.”

Traffic is so bad now that it can take up to 1.5 hours to travel two miles along the Sunset Boulevard corridor in Brentwood, leaving residents “prisoners in their own community,” the lawsuit alleges.

“Archer proposes increasing the number of events on campus that will bring tens of thousands of visitors during the course of the 36-week school year for athletic and special events,” the lawsuit alleges. In addition, the city gave Archer permission # for the first time # to run six additional weeks of schooling in the summer.

“Archer wants us to believe its project will not increase traffic, that it’ll actually improve it,” said Wendy-Sue Rosen, co-chair of the Sunset Coalition. “It defies logic that adding two gyms, a performing arts and a visual arts center, increasing enrollment, staff, athletic and special events could reduce traffic.”

“The city failed in its duty to protect Brentwood, the Pacific Palisades and all the visitors and workers who commute on Sunset Boulevard from the terrible traffic impacts of this project,” said John Binder, president of the Upper Mandeville Canyon Homeowners Assn. and a member of the Sunset Coalition’s steering committee. “It’s irresponsible.”

City Hall’s approval of the conditional use permit for the Archer project was illegal because a CUP may only be issued when a project’s “location, size, height, operations and other significant features will be compatible with… [the] surrounding neighborhood.”

But “Archer now seeks authority for massive expansions, including taller buildings than allowed by code, more floor area ratio than permitted by code, a dramatic expansion of campus operations” that make it incompatible with the adjoining neighborhood, the lawsuit alleges.

“Archer can’t just impose an over-sized building project on its residential neighbors,” said Rosen. “Archer is supposed to adapt its plans to suit its neighbors; the neighbors don’t have to adapt their lives, for the worse, to suit Archer’s needs. By approving this project, the city has made a joke of the protections a CUP is supposed to provide neighbors.”

During the three-years of excavation and construction Archer students and neighbors will be exposed to diesel particulate emissions from the operation of heavy construction equipment. The school’s environmental review “fails to properly calculate the risk to its own students from exposure to toxic diesel emissions.”

“The school admits its massive construction project will make the air more dirty,” said Rosen. “Archer has even promised to regularly wash local residents’ windows to remove the dust and diesel particulate matter created by construction. But what’s Archer doing to protect the lungs of its students and neighbors from this same air-borne muck? Nothing. That’s a huge oversight and a health hazard.”

Archer’s environmental review illegally failed to identify possible alternative ways of growing the school without concentrating all its growth on its small, 7.2-acre property at 11725 Sunset Blvd. Other schools, like Crossroads, Windward and Marlborough, have only one gym on their campuses (not two like Archer plans to build) and schools, like Brentwood and Harvard-Westlake, have two separate campuses.

“What makes Archer so special that unlike its sister schools it must cram its entire physical plant onto one under-sized parcel?” said Wright. “A school with Archer’s enrollment should be on a campus of 27 acres – not seven – acres. Archer simply refused to follow environmental rules that required it to look at plausible alternatives to its proposed project. This is just more evidence of Archer’s public-be-damned attitude.”